Back to all Articles

Industry to Dip Into New Pools for Leaders

The c-suite needs to prepare for the revenge of the nerds.

Retailing’s next generation of chief executive officers — as well
as the directors to whom they report — will be more likely to come from the world of technology. And the ceo’s will be more apt to be askers of great questions than providers of all the answers.

This view emerged from the study “The Future of the Retail C-Suite” =conducted by the executive search firm of Berglass + Associates in partnership with WWD that included the views of 127 industry executives, nearly a third of them presidents or ceo’s of their own organizations and another 30 percent holding the title of vice president, senior vice president or executive vice president.

“The retail industry is hardly devoid of talent,” said Les Berglass, founder and chairman of the firm that bears his name, “but the talent isn’t adjusting to the changes in the industry. The effective ceo today is no longer a great picker of product but someone who’s a great picker of people, who can aggregate the talent and ask them the right questions.”

From what industries will tomorrow’s leaders come? Asked to name the top three industries likely to supply the retail talent of the future, participants made technology their top response, selected by 57 percent, followed by pure-play e-tail, at 51 percent, and consumer packaged goods, at 43 percent. Also popping up on more than 20 percent of surveys were consulting (39 percent), communications (28 percent) and media (27 percent).

Respondents were asked to name the top three disciplines required for the next generation of retail ceo’s and the choices stood in marked contrast to those perceived as being prevalent today, although they meshed closely with their selections on the industries providing outside talent.

“Digital/technology” led the list, selected by 43 percent of those participating, followed by merchandising (34 percent) and globalization (33 percent). Today, digital and technologyexpertise are viewed as highly prevalent by just 6 percent of respondents versus 48 percent choosing merchandising and 24 percent picking globalization.

The only discipline among today’s ceo’s viewed as more prevalent than merchandising was finance, at 49 percent, but, in what could be perceived as bad news for the industry “pencils,” only 17 percent of the sample said they expect that to be among the top three disciplines in 2020. Sales are viewed as a critical skill for the ceo of 2020 by 21 percent, just slightly more than half of the 39 percent who see them as among the most prevalent talents today.

The emphasis put on global credentials has been obvious in recent ceo selections, including the promotion of C. Douglas McMillon to ceo of Wal-Mart Stores Inc. after he served as ceo of Wal-Mart International. This month alone, J.C. Penney Co. Inc. tapped as its ceo-designee Marvin Ellison — importing supply chain, store and loss-prevention credentials learned at Home Depot — and Gap Inc.’s Art Peck, president of growth, innovation and digital, was named to succeed Glenn Murphy as ceo.

While industry observers routinely cite examples of ceo mismatches when retailers go outside their merchandising comfort zones for top talent, such as in the form of Apple veteran Ron Johnson at J.C. Penney, Berglass noted that merchandising, like sales, needs to be strongly represented but by no means constitutes a prerequisite for the top job. “It’s about finding the talent, nurturing it and, above all, giving it the freedom to innovate, regardless of the function,” he said. “A ceo doesn’t need to be a great merchant to empower great merchants. We need to look for ‘likes’ — and I don’t mean Facebook ‘likes’ — but similarities, skills that are transferable.”

The traditional road to the top in the last century usually began with people who’d spent their careers in pursuit of sales, but that path was often prone to emphasis on top-line, rather than bottom-line, results.
“I had a boss in the beauty business early in my career who used to say, ‘Every mistake I ever made in my career is in my warehouse,’” the search executive recalled. “That stuck with me.”

When asked to identify the top five leadership characteristics for c-suite leaders today and in 2020, a “strong vision for the company” was the top pick for both the present and future. Traits such as “building a team and fostering talent” and “ability to adapt and manage change” fell within a few percentage points of their current results in the tabulations for the future.

But a “global perspective,” seen as among the top five skills today by one-third of respondents, shot up to 51 percent for the management skill set of tomorrow, finishing just a percentage point below the “strong vision” figure.
In a working paper from Harvard Business School cited in the WWD/Berglass study, the size of the c-suite has doubled to 10 people from five in the Eighties. But less than half of the respondents — 43 percent — expect the c-suite to grow in occupancy, versus 32 percent who expect its size to be unchanged and one quarter who expect it to decrease.

That was surprising in light of the group’s expectations for individual roles that are hardly omnipresent now.

Just 5 percent of the sample’s companies have chief customer officers today, but 23 percent expect that their employers will have them in five years, a nearly five-fold increase. Forty-three percent have chief marketing officers, while 63 percent expect them to be in place by 2020. Chief digital officers exist within the firms of 9 percent of the sample, a number expected to quadruple, and 13 percent have chief e-commerce officers, a number expected to increase to 33 percent. Chief technology officers are in place at just 14 percent of respondents’ firm, a number that will nearly double, to 27 percent, by 2020, if the executives’ guesses are on target.

To Berglass, the establishment of the chief customer officer role is of paramount importance, both to smooth out the current political turmoil that exists between e-commerce and brick-and- mortar functions within retail organizations and, more importantly, to help realize the “seamless” omnichannel experience that consumers seek as they combine digital and in- store shopping and buying.

“The chief customer officer should be the supermarketer, the glue that holds together the Web and brick-and-mortar teams,” Berglass said. “They’re channel agnostic — they don’t see ‘channels,’ they see ‘customers.’ Right now, the Web and brick- and-mortar often speak different languages; the Web site doesn’t look like the store and the store doesn’t look like the Web site, or the Web site is the outlet store when in reality it should be the flagship.“

The “cco’s” should be able to not only cross over from one channel to the other, but from one generation to the other, embracing Millennials as well as Baby Boomers, as needed. Although the leap of the customer officer was statistically conspicuous, Berglass believes, based on conversations with industry leaders, it might in fact be understated: “Once the number gets to 23 percent, it will quickly move higher because people will see how badly it’s needed.”

Dissolving the wall between brick-and-mortar on the one hand and e-commerce on the other is one task necessary to compete in today’s retail environment, but to Berglass it’s representative of a need throughout retailing to break down barriers. He advised companies to “foster a borderless organization without silos, and stop using the word ‘department.’”

He pointed out that the priorities of a retail ceo haven’t changed — they remain strong, innovative products; tight links to the consumer, and the hiring and retention of great talent — but the means of delivery have been forever altered. As an example, he drew on his occasional use of car services to navigate around his native New York.
“I still use car services,” he observed, “except now I get to them through Uber. And it’s not like digital is ever going to be half of the retail business. Apple makes this point well — their customers waited for the new iPhone, but what did they do to get the device that would allow them to shop more easily through mobile commerce? They lined up at Apple stores.”

In a section on companies’ boards, the study found an average tenure of 16.9 years for directors, with 60 percent having served at least 15 years and nearly one in five — 19 percent — putting in at least 25 years of service. But directors received fairly high grades for their work, with 22 percent rating them as “very effective” and 63 percent as “somewhat effective.” 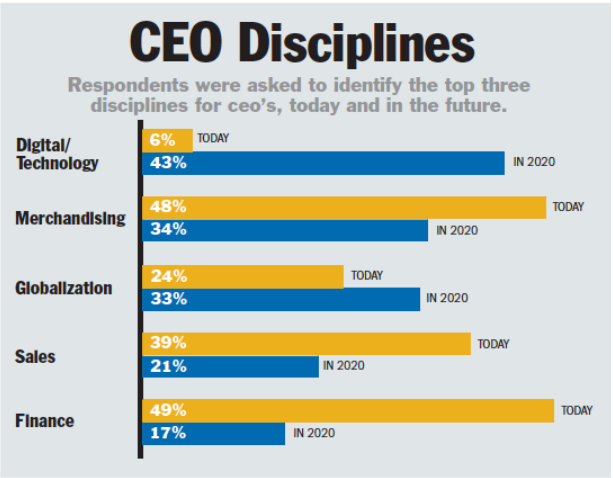 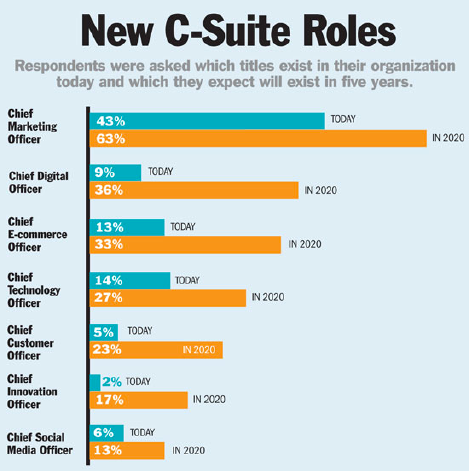 Paralleling the responses about leadership qualifications, 72 percent of respondents who expect changes in board composition expect future directors to have technology backgrounds, 64 percent expect them to have global experience and 53 percent expect they will come from outside of retail.